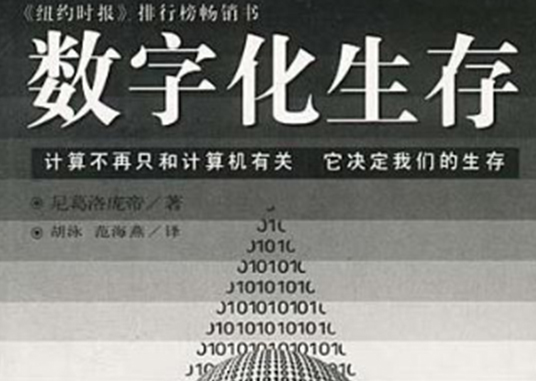 By 1996, Internet was no longer exclusive to senior intellectuals, but displayed its nature as public infrastructure. Therefore, how to make Internet better serve the public became a top issue on the agenda of the country. First, great attention was paid to support for and management over Internet on the national level and corresponding specifications on technology implementation and management were formulated to promote healthy development of Internet industry, drive the emerging technology of Internet to better serve the public in a wider scope and help make contribution to social civilization advancement. Second, in concert with government's active efforts for improving network management, construction of city network in local areas accelerated. Shanghai Public Information Network was built and CNINFO.NET launched its first group of stations such as Guangdong Gent, Sichuan Tanfo Online and Shanghai Online. Under such influence, Beijing's first Internet bar Spark Internet Café was opened for service, attracting a large number of netizens. These Internet service projects were close to people's life and released people's passion for Internet. Third, far-sighted start-ups and entrepreneurs with global vision predicted that Internet would play an unprecedented role in China and bring Chinese businessmen a tremendous market. Therefore, these pioneers devoted themselves into Internet without hesitation, with the hope of standing out and making great achievements.

To sum up, this year, the influence of Internet on Chinese people already expanded from ideology to realistic life. Government had an increasingly clearer mind on regulating Internet; the business circle was eager to have a try, attempting to seize the opportunity; ordinary people started to experience the magic that Internet did over their life. All these were closely related with people's passion for Internet, because netizens hoped to be able to freely enjoy the brand new experience of Internet in an increasingly mature network environment. The most distinct feature was emergence of business websites and rising network start-ups. They started the prelude to China's Internet start-up wave, which was to be followed by even more brilliant chapters.

Feb.1On February 1, Interim Provisions on Administration of the International Networking of Computer Information Networks in the People's Republic of China (Decree No. 195 of the State Council) was promulgated 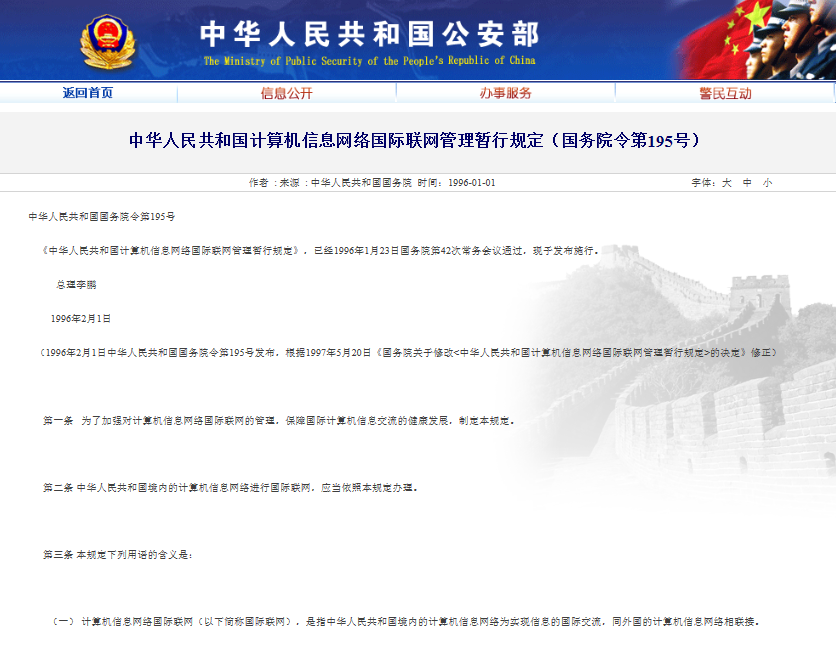 Since telecommunication service was opened to the public, government paid special attention to Internet, an industry with enormous potential. After CHINANET national backbone network was built in January, on February 1, 1996, the State Council promulgated the Interim Provisions on Administration of the International Networking of Computer Information Networks in the People's Republic of China (Decree No. 195). The Provisions was an effort to regulate access to international Internet on the legal level for the first time, consolidating the foundation for benign development of Internet industry, objectively encouraging more Chinese start-ups to innovate and creating a favorable public opinion environment in general. Shortly afterwards, then Ministry of Posts and Telecommunication issued the Measures for Administration of Internet International Networking of Public Computers in China, which took effect as of the date of issuance. In June, The State Council Informatization Leading Group was established to develop the Internet undertaking in China. All of these efforts paved a solid road for perfecting the Internet management system. 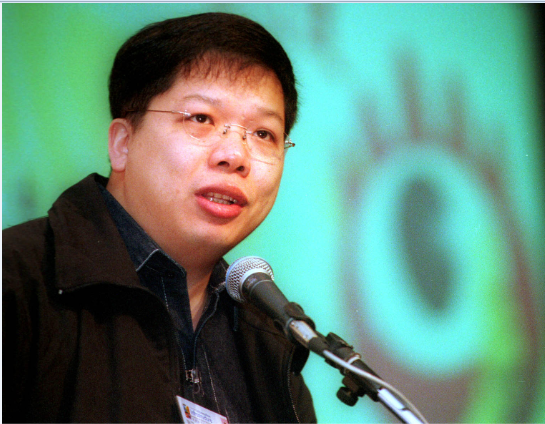 At the beginning of 1990s, Stone Richsight was founded. Wang Zhidong and Yan Yuanchao were the earliest core management members of the company and also renowned programmers in China. Though the Rich Win series software made Stone Richsight quite famous at that time, the company had to develop new businesses and seize opportunities especially when Internet started to rise in China.

On April 29, 1996, development of Stone Richsight's first Chinese website kicked off and Xinyi Multi-media Team founded by Wang Yan and Li Songbo (current Vice President of sina.com.cn) was integrated into the company. Stone Richsight set up International Network Department in the charge of the two persons to focus on building of the website SRSNET. Given that domestic Internet backbone networks lacked interconnection channels back then, and also in order to facilitate Chinese all over the world to visit the website, the Department decided to place the server in US.

With its far-sighted vision and strategic development strategies, Stone Richsight set foot in Internet and launched the first Chinese Internet platform especially designed for online users, RichWin for Internet. In May of the same year, several ISPs and ICPs in Hong Kong and US reached out to Stone Richsight, hoping that the company could provide the simplified version of RichWin. As the complete version seemed unnecessary for Internet applications, the company wisely signed contracts with the ISPs and ICPs and provided them with the simplified version of RichWin, which is placed at overseas Chinese websites for download by netizens. On November 1, 1995, PhD. Zhang Chaoyang returned to China from Massachusetts Institute of Technology. In August 1996, with the support of Prof. Nicholas Negroponte (author of the book Being Digital) and US venture capital, he founded Aitexin Co., Ltd and launched Aitexin website. Aitexin became China's first Internet company invested with venture capital.

One part of the content of the Aitexin website was categorized search, which was named "Aitexin Compass". Due to its relevance to search, it was renamed as "搜乎" (SOHU, "搜" meaning "search"), which was derived from a term in traditional Chinese culture. During its second round of financing, Aitexin identified SOHU business as its major direction of development in the future. Given that in both Chinese and world culture, fox represented wit, agility and wisdom, which were also the features of search engine service, in November 1997, "搜乎" was renamed "搜狐" (SOHOO, "狐" meaning "fox").

In the year of 1997, content on the Aitexin information platform became an important part of information on CHINANET (163). In February 1998, Aitexin successfully introduced USD2.2 million investment from Intel and IDG and managed to promote SOHOO, China's own search engine among the broad Chinese netizens. The brand of SOHOO was officially born. In October, the domain name SOHOO.COM was change to SOHU.COM. "Get a map when you go far away, go to SOHOO when you get online" and SOHOO opened the magical door to the Internet world for Chinese netizens thereafter. In 1999, the English name of SOHOO was changed to SOHU (http://www. sohu.com). Over a short span of half of a year, it developed into one of the Chinese websites with most visitors and highest popularity in China. Aitexin also rapidly grew into an Internet company with more than 70 employees, with branches in Shanghai and Guangzhou.

Up to today, SOHU has always been taking meeting users' Internet demand and experience as its mission and developed into a navigator of China's Internet. It has influenced 80% of Chinese netizens and become their mainstream information media and a platform of life, entertainment, communication and interaction.

1996The book Being Digital by Nicholas Negroponte was published in China 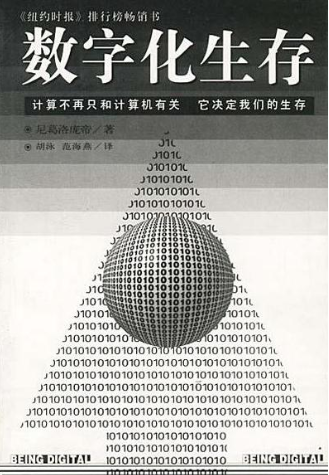 The book Being Digital was extremely popular in China after it was published in 1996. In 1995, Nicholas Negroponte, who was called godfather of information technology investment and trend analysis, published 18 articles in the column Connection. The articles were collected into a book and published, which was the famous Being Digital.

In 1996 when Hu Yong saw the English book sample, he intuitively believed that the book would become The Third Wave of the 1990s. The book happened to appear when China needed Internet enlightenment and such a historical turning point was not easy to find. At that time, Hu was writing Network Is the King, but he decided to suspend the writing immediately and start the translation work. The publisher originally hoped to imitate the translation of Taiwan and name the book "数位革命" in Chinese, but Hu insisted with the title "数字化生存". Hu Yong cooperated with Fan Haiyan to split the translation work by half and finished it in 20 days. Once published, the book became overwhelmingly popular.

In 1996, Internet in China was like a desert, which most people barely understood. Although it was said there were 620,000 Chinese netizens, the majority of them were computer practitioners. The network was not only slow in speed, but also unstable. As Hu Yong, the Chinese translator of Being Digital, said, "the time of the book in 1996" happened to be "a critical moment of transformation from ivory tower to crossroad!"

It was fair to say that Being Digital was the bible of information technology/concept development in the 20th century and its prevalence and transmission exerted profound influence over enlightenment and development of the information age in the century. It was even more meaningful for the over one billion Chinese people. For most regular readers, the book displayed an admirable picture of high-tech life; for wave riders of the information economy, it brought even more changes. In 1997, Hu Yong finished writing of the suspended Network Is the King and Tian Suning bought over ten thousands of copies to hand out. As Hu recalled, Tian was building network infrastructure in a large scale nationwide at that time. Once, when he visited Guizhou and was asked by local officials as for his purpose of the visit, he replied: "I came to build information expressway." The local officials said you should contact Department of Transportation because they were in charge of road building.